No Mud, No Lotus.

I hadn’t gone running in a few days, so the fact that it was Monday today had slipped my mind this morning when I headed out to my favorite trail. I was more preoccupied with how I was going to fare on this warm day, more interested in how well I would run rather than on the day of the week it was. But, when I pulled into the parking lot and noticed the proliferation of Priuses with Bernie Sanders stickers, I suddenly remembered.

Dammit. I hate running on Monday mornings when the Mean Ladies walk. Usually I try to arrive later in the morning in order to avoid them. I’ve been running on this particular trail most mornings for the past two years, but only in the past six months or so have the Mean Ladies become a problem. I’m not exactly sure how it all started, but a couple of months ago the issue kind of came to a head.

One of the things I like most about my favorite trail is that I see the same people there. After two years, I’m on a friendly basis with many of them. We smile and nod, wave, say “good morning” day after day, week after week, season after season. I’ve even gotten to be on a first name basis with some of the folks there: Danny, Lisa, Diane, Jeff. I often also see many people I know from various other contexts. After 35 years in this town, I know a few folks. Generally these encounters are friendly, so I’m a bit perplexed as to how I came to be at such odds with this group of ten or so mostly older (say, oh, over 60) women.

Part of the problem is that they always walk side by side and have a tendency to not move over when I either come running up behind them and need to get by nor when I come running from the opposite direction. They meander four or five abreast across the whole trail, ignoring my need to get by and presumably the needs of other trail travelers as well.

And it’s not like I sneak up on them. I am a noisy runner: breathing heavily, my water bottles sloshing on their belt around my waist, my shoes flapping and splooshing in the mud. I am not a swift nor elegant gazelle. Most people hear me coming and, if they are walking two or three across, move over courteously to let me by. I do the same for others. I run on the far right side of the path, moving toward the center only to avoid hazards or large mud puddles.

But these ladies . . . if they were cars, they’d be driving in the wrong lane. There’s a larger one, more school bus than smart car, who always walks on the left, on the inside of the path and for whatever reason refuses to get out of the way or step a bit to the right. She will not cede the right of way, and her obstinance (or obliviousness) makes me crazy. Nearly everyone treats the running/walking trail like a road—slower traffic keeps right except to pass. Occasionally someone will walk on the left, against the grain, but generally they move aside to let others pass. 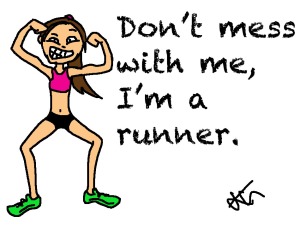 A couple of months ago, on a Monday (for I only ever see them on Mondays), I met the Mean Ladies on a wider part of the trail, but it didn’t matter because they were spread all the way across. I had to step off the path and into the brush to get by. They did not budge. Of course because I am running and they are walking, I met them again during my run, and this time, I resolved I would not step off of the path. I would hold my narrow bit of ground.

Also about this time, I had been meditating in the mornings before my runs as an assignment for my Transpersonal and Eastern Philosophies counseling class. One of the modalities we were studying was Mindfulness. So, as I approached this maddening group of matrons, I had a bit of an argument with myself. “Remember the sacred pause,” I admonished. “Take a breath.” But as I drew closer and as it became increasingly apparent that linebacker lady wasn’t going to move, I lost my mind a little. And, in my defense, if I moved a foot to the right, I would, in fact, land in the lake.

I tried to make eye contact, but the Mean Ladies refused to see me. They continued walking and talking across the entire trail, ignoring my approach. I held my ground and continued running forward. I got closer and still they didn’t move, did not cede a single inch. I braced myself and continued apace, hoping for a last second miracle. But no. My left arm (where, incidentally, I wear my iPhone in a “tunebelt”) smacked into the left arm of the Largest of the Ladies.

In that moment of impact, I felt smugly satisfied and a little scared. What if she came after me? I could outrun her, sure, but I felt kind of bad. I mean, yes, she and her Matronly Mavens had Most of the trail, but why couldn’t I have remembered in that Moment to take the Sacred Pause? To be the bigger (metaphorically speaking, at least) person. Why couldn’t I have just stopped, waited for the Mean Ladies to meander on by, and then continued my run? Why wasn’t I More Mindful? I berated myself and vowed to do better.

The next Monday I again forgot what day it was and encountered them, but this time I was able to be more mindful. I managed to come upon them at a particularly wide spot on the trail that even they could not fill up, and then upon completing my first lap, I reversed direction in order to avoid seeing them again, at least that day. I took to running a bit later on Mondays for a few weeks and avoided them altogether, until last Monday when I approached them from behind. I mustered up my courage and my voice and bellowed out (nicely) “Excuse me!” And miracle of miracles, the large lady moved over. I think I surprised her, and she couldn’t see who it was coming up behind her. I plowed by, grateful, and gave a little wave of thanks as I passed. Maybe she was learning some Manners after all. Or maybe I was.

Today when I met them midway around the lake, I slowed down and made room for them—as well as I could—and again reversed directions after my first lap. I didn’t encounter them again until we all ended up in the parking lot together, where, I again gave them all very wide berth. Before I even started my car, I let them all climb into their Priuses and drive away. Then I made more than a mental note about Mondays. This time, I put Mean Ladies in my calendar. With an alert. Sometimes, being mindful requires a reminder.