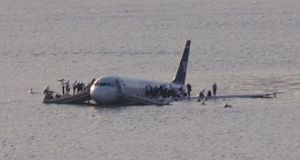 I worked for the Catholics when Captain Sully Sullenberger landed US Airways Flight 1549, an Airbus A320-214, in the middle of the Hudson River with such skill and aplomb and no loss of life. A few days later, a picture of the plane– the so-called Miracle on the Hudson–appeared in the staff lunch room, scotch-taped to the whiteboard. There was a drawing of the plane floating in the river and underneath and around the plane were a giant pair of hands. God’s hands as far as I could tell.

I wondered that day as I stared at that picture on the whiteboard if Sully was angry that people were more willing (or at least as willing) to credit God and divine intervention than they were his skills as a pilot.

As I stood contemplating this bit of magical thinking, I couldn’t help but wonder about all of the other airplanes in the history of aeronautics that had crash landed with less fortunate outcomes. What pictures were we going to draw of these planes? I imagined the large God hands squeezing the planes and hurtling them like an angry Zeus and his lightning bolts, violently toward earth.

Is this what has happened to the missing Malaysian Airlines flight 370? Did God have some sort of score to settle with the 239 passengers? Where were His huge, cradling hands this time? Evidently God did want to save passenger Greg Candelaria (see this post on Patheos.com blog The Friendly Athiest). Mr. Candelaria credits the Big Guy with divinely intervening in his life, thereby saving him from whatever horrible fate the rest of the passengers succumbed to. This sort of thinking makes absolutely no sense. Somebody made an error and now the plane is gone. Period. Sully made a great save and no one died. Period. No magic.

What sort of arrogance is required to claim God singled you for salvation while condemning your colleague and 238 other people to death? The guy is still with us because he cancelled his trip. All of us who weren’t on that flight should also be able to claim divine intervention, yes?

We may never know what happened to Malaysian Airlines Flight 370. Maybe they got Raptured. Maybe God picked that plane right out of the sky and took it to heaven and we will never find it. Maybe, Mr. Candelaria missed out on that. Maybe god doesn’t want him right now. I wonder if he considered that possibility?