I don’t know what letter I should be on by this point. Clearly I have been derelict in my blogging duties, and probably have been ousted from the A-to-Z community, but I feel compelled to write today, dereliction be damned.

Not much makes me happier than sitting in my kayak on the lake on a sunny day, except maybe kayaking after a great run. Today was one of those banner days when I got to do both, something I haven’t done for months and months. 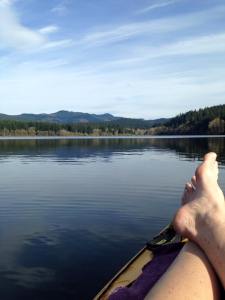 The sun finally made an appearance in conjunction with a day in which I had nothing to do but read for class, so I took advantage and slept in, went for a run (5.26 miles or roughly 8.5K), and then spent the remainder of the afternoon in my kayak on the lake (reading my Gestalt textbook). When I looked up from my book, I got to see fish jump and hawks swoop down from the skies to pluck the trout from the water. I chased a blue heron down the coastline trying to get it to sit still while I took a picture. An unsuccessful endeavor, but majestic and rewarding nonetheless.

After a week off due to illness, I took to the trails yesterday and got in a little more than seven great miles (or approximately 11.5K). In fact, yesterday my fastest mile was the last mile. I love negative splits, and I love coming back strong after time away. Today’s run was a bit tougher, a little slower, and a tad shorter as I pulled something in my right ankle while mowing the back 40 yesterday. I had to wear my rubber boots to mow since most of the backyard is a swamp. Those polka dot fashion boots from Fred Meyer don’t have much stability or support. Now I’m sitting with ice on my ankle.

I’ve not seen the backyard this wet in the nearly 20 years I’ve been living here, but had I not mown yesterday, I would have to rent a hay baler next weekend. As it was, I had to take a layer off with the weed whacker first. And I am not exaggerating when I say there was at least six inches of standing water in places. One section of fence had fallen over, the posts completely rotted away. I suppose at some point that’s going to cost me. For now, it’s propped up to keep the deer out (little f**kers got in and ate the geraniums and pansies Mom planted last week—for more on that ongoing battle, check out this blog fr

om a few years ago).

But today I felt great having tackled the first mowing of the season, the first run in a week, and the first kayak since October. I am a little stiff and sore, but done with the worst of it, ankle notwithstanding. I am looking forward to more (especially since I recently talked a couple of buddies into buying kayaks).

Spring is blossoming slowly in these parts this year, and today was a small taste of everything I love about the next six months: kayaking, running, my backyard, and sharing it with friends.

Hope to see you out there!