My best friends are nearly all in their late 70s and early 80s. My inner circle looks like a Geritol commercial, FFS. They all grew up when my parents did, but our age differences add a richness to our experiences.  We feel like family. The good kind of family.

We step up and step in for each other, we seek one another’s wisdom, and rely on each other for early morning drop-offs at the airport. For a civilized midday meal in good company to talk books and to swill vast quantities of wine. For helpful and honest feedback on the pages often tentatively offered up for critique. For constantly rescuing me, for cheering me on, for pushing me forward, for celebrating, and for mourning with me. For allowing me to just be myself. For providing sanctuary and wise counsel, for having all the sports channels and for loving pizza and beer.

It’s been a rough couple of years, and I feel incredibly fortunate to be able to write that all of my elders, my wise women, my friends came through. We have weathered this storm so far, to this sliver of land for a moment. We have problem-solved, Zoomed, healed from all sorts of maladies, most of them pretty damn serious, too. Prayed for one another, listened, helped, hawked my personal belongings to strangers for top dollar at my garage sale. Fed each other. Waved goodbye and hugged hello.

Two of my friends have this print in their living room, of four dogs sitting, forward-facing all, in a red rowboat. One dog, rope in her mouth, swims in front, pulling her friends in their boat, called Friendship.

We often laugh and remark on this print. How life imitates art. I am the dog with the rope in her mouth. I am pulling my boatful of elders. And they are sustaining me.

My friend Linda swims nearly every day. Her devotion to swimming her mile in Lake Whatcom is as sacred as my devotion to running laps around Lake Padden. We often meet up to write together after we’ve completed our individual exercise routines, and at some point we started talking about her swimming across the lake instead of along the shore.

“How far is it from your beach to the other side of the lake?” I asked. “Could you swim it?”

“Probably a half mile,” Linda answered. “Of course I could swim it, and I have, but I need an escort so I don’t get run over by a speedboat.”

That was last summer, and somehow the sunny warm days ended without us ever having made the crossing.

Recently, as we had a little bit of a heat wave and a string of decent days, I’ve been jumping in the lake to cool off after my runs and then hopping in my kayak to soak up some rays. Which reminded me that Linda and I had yet to conquer the cross-lake challenge. So I brought it up, as summer seemed to be coming to a rather quick and blustery end.

“Still up for a cross lake swim?” I texted her.

“Sure! When?” She texted back.

“Friday? Weather still looks good. I’ll be done with school for the quarter.”

Last Friday morning dawned gloriously pink. “Uh oh,” I thought to myself as I let the cat in for his morning feeding. “Red sky in the morning, sailors take warning.” I texted Linda. “Wanna go a little earlier?”

I shooed the cat out the door and hurried to get dressed. Then I loaded the kayak in the back of my truck (so much easier than heaving it up onto the fancy and expensive Thule rack I own) and headed out to Sudden Valley to be the support boat for my friend’s great swim.

I lugged the kayak down to the shore, through the bushes and garden bark, across the vast green lawn dotted with deer poop, which I deftly dodged (you can read more on how I love deer here). I tied a rope around the little carry handle on the end of the kayak and lowered it down the high bank into the water. So far, so good, I thought.

The sun was rising over the mountain across the lake, glistening golden against the clouds. The water, for now, was calm, inviting. And warm. I stuck my toe in. Hmm. I could swim in that. But I had to be in my kayak to fend off bigger boats and wayward jet skis in order to protect my friend. Plus, I don’t really like swimming.

Linda walked down to the water’s edge in her black swimsuit, pink bathing cap, and teal blue flippers. She held two pairs of swim goggles in one hand and a black neoprene swim cap in the other. Her wife Amory trailed behind her, phone at the ready to document this momentous event. But first things first. A goose had left a large, uhm, gift on the bottom step and as I was about to brush it off into the water with my paddle Linda stopped me.

“NO! Don’t put that in the water,” she admonished. “Amory, would you go get a paper towel?”

“Oh, like there’s no other goose poop in the lake,” I said from my kayak cockpit. I suppose if I were getting into the water, I might feel the same way. “I guess you have a point,” I conceded.

“Just so you know,” Linda said, pointing at me, “I count as I swim, so don’t interrupt.”

“Roger that,” I saluted, a little disappointed as I had envisioned a leisurely paddle-swim in which we conversed. Guess it was going to be a quiet journey instead.

Once the goose droppings had been dealt with, Linda descended the five steps and dove in, splashing me, and we were off. I waved to Amory standing on the bank and pointed my kayak toward the distant shore. I knew immediately I had more of a challenge on my hands than I had anticipated, as Linda veered off in the wrong direction, and by wrong I mean instead of heading across the lake, she appeared to be swimming parallel to the shore. I tried to herd her into going the right direction, but she could neither see nor hear me. I sighed and stayed close, assuming she would figure it out eventually.

We zig-zagged across the lake, making it to the other side in about a half hour. I took a picture and sent it to Amory. “We made it!” I wrote. Linda and I chatted for awhile, took a few pics of 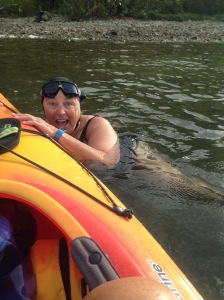 each other, and then headed back.

For some reason, she swam in a straighter line going the other direction. I didn’t have to herd her nearly as much, though when we were about ¾ of the way across, she suddenly veered to the south. By the time I got her attention, she’d swum a few hundred yards. We would have been back to her beach if she had been going the right direction.

She laughed when I finally got her rerouted and adjusted accordingly. “I didn’t want to tell you how challenging this would be,” Linda said. “I didn’t want you to change your mind. You should have seen me swimming across the St. Clair River (in Michigan, at Amory’s brother’s house, over Labor Day weekend), dodging speed boats and freighters. I almost ended up in Detroit!”

I was very glad that I hadn’t been the support boat for that adventure. This quiet lake swim was

proving to be more complicated than I had anticipated. And we’d only seen one jet ski and three boats, one of which was oar-driven. I was pretty sure I wouldn’t have been able to keep her safe in a busier body of water.